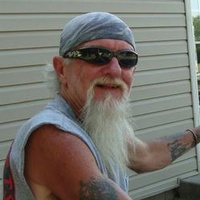 Order Sympathy Gifts
for the Family

West Coast is survived by his wife of 23 years, Suzy; his children Billy and Vanessa; his step-son Tom; his sister Debbie and nephews Rocky and Michael; his brother Bob and his wife Marge; and a host of relatives and friends. He is preceded in death by his parents William and Annabelle.

West Coast enlisted in the Army after high school and served in Vietnam from 1967-1968 in the 23rd Americal Division. He was a state charter member of the Delaware Vietnam Vet’s Motorcycle Club, which he helped organize in 1986. He loved to ride his Harleys and be with his Club brothers from across the country. He was also an active member and officer of the VFW Post 838.

In lieu of flowers, please make a donation to your favorite charity in memory of West Coast.