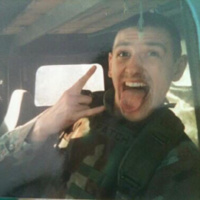 Born September 12, 1980 in Dover, NH the son of William G. “Bill” Patch and Donna M. (Dixon) Hitchcock, he resided in Somersworth for the last ten years coming from Farmington where he was raised and graduated from Farmington High School.

Troid served as a Army Combat Veteran serving in Kosovo and Korea.

He enjoyed outdoor activities including camping, four wheeling, snowmobiling and shooting his weapons on his free time, along with playing video games, coloring, watching movies with his wife and children, working on cars and houses, taking night walks with his family, and listening to music which was his go-to for easing his anxiety.

He was loved by many people and he had a heart of gold, he would go out of his way to help people in any way he could and would give the shirt off his back.

Calling hours will be on Tuesday October 29, 2019 from 4:00pm – 7:00pm with a service to follow at Peaslee Funeral Home, 24 Central Street in Farmington, NH. Interment will be NHSVC in Boscawen at a later date.