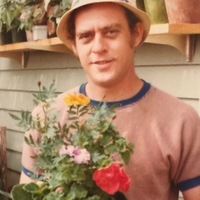 Born July 28, 1938 in Waltham, Massachusetts, son of Victor Joseph Joos, Sr. and Marion (Lydon) Dodds. Victor graduated from Spaulding High School 1956, received a Bachelors of Arts from Western Michigan University, and a Masters of Public Administration from the University of New Hampshire. He resided in Milton, NH since 1971.

Victor devoted much of his life to civic engagement and public service having served as a: news paper reporter for Fosters Daily Democrat; English teacher; Peace Corps Director/volunteer leader; State Legislator; and Town Administrator, Selectman, Moderator, Treasurer, Sewer Commissioner, and School Board Chair, and a long-term member of the Economic Development Committee. Victor was also a trustee for the New Hampshire Farm Museum, Nute Library, and active member of the Tri-Town Democratic Committee.

Having built his first greenhouse at the age of 16, Victor continued his passion for agriculture and sustainability during his twelve years in the Peace Corps. In 1971, he and his wife Annie, founded and operated Milton Gardens and later, Brian Patch Greenhouses in Milton.

In retirement, Victor used art as a medium to convey messages of political and social activism. In addition to designing, creating, teaching, and presenting on the art of rug hooking, he was a juried member of the League of New Hampshire Craftsmen since 2008.

Survived by his loving wife Annie (Thien) Joos of 52 years and their children: Micah Joos, his wife Jennifer, and children Alexander and Cameron of Westford, MA; Ethan Joos, his wife Caroline, and children Gabriella and Lucas of Mooresville, NC; and Chandra (Joos) deKoven, her husband Aram, and son Reid of East Haddam, CT; and two sisters: Nancy Drew and Lauren Jacobs both of Milton, NH. He was predeceased by his three brothers: David, Peter, and Dennis Joos.

As per his wishes, a private memorial will be held.  In lieu of flowers, memorial donations may be made in his memory to: Nute Library in Milton, NH.